I’m an American… I’ve been to plenty of football games. But football? As in a sport that’s actually played with feet? That’s something completely foreign to me. So, as a foreign exchange student in Europe, I decided I would dive right in.

I bought tickets to a Malmö FF match versus Dalkurd FF when Nick came to visit me during my last week in Sweden. Just a 15 minute train ride from where I was staying in Lund, Swedbank Stadion lies not too far from the shadow of Malmö’s iconic Turning Torso building. We arrived to the stadium plaza an hour early and went straight to the team store to pick up some of the team’s baby-blue merchandise for souvenirs. 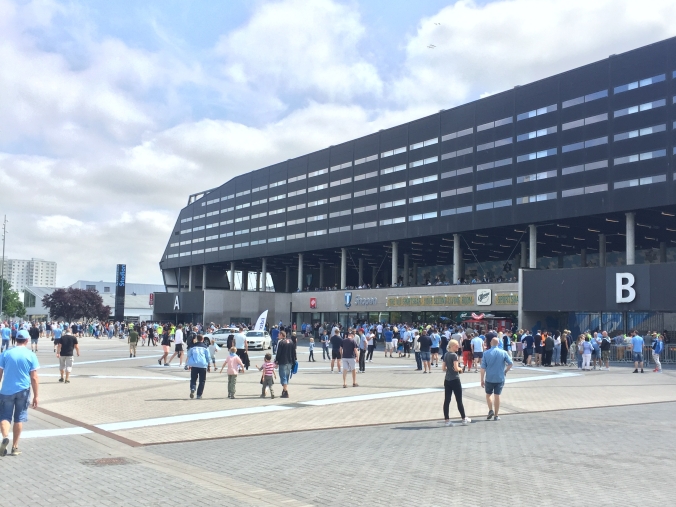 Donning our new colors like a pair of veteran fans, we grabbed a beer at O’Leary’s sports bar and rushed inside to make it to our section just in time for kick-off. We slid in with the Malmö faithful – a standing-room-only section with cheaper tickets and a rowdier atmosphere – for an ideal first taste of professional football in Europe. Armed with my limited knowledge of Swedish, we sang along with the chants I remembered from a Malmö hockey game, and faked our way through the ones we didn’t understand.

Dalkurd, last in the Allsvenskan coming into the game, stifled the home team defensively and connected on a 43rd minute goal despite not having possession for the majority of the first half. We were surprised to learn that Malmö, which has dominated the league historically, has struggled this season. Ignoring the team’s recent misfortunes, Nick prophesied a goal within the first fifteen minutes of the second half and a 2-1 comeback victory.

Malmö came out of halftime with furious pace, while Dalkurd seemed to be content to run out the clock. The visitors could only fight off the oncoming attacks for ten minutes before a long strike by Carlos Strandberg made good on the first part of Nick’s prediction and tied the game. The celebration was the most memorable portion of the game, as the crowd erupted in cheers briefly but quickly fell back into organized clapping and chanting.

Unfortunately, Malmö’s effort was not enough and Dalkurd hung on for a 1-1 draw. The body language of the players and fans let us know that it was more of a loss than a tie for the home team. A disappointing result did not mar an excellent fan experience, however, and we returned home with Malmö chants stuck in our heads until we fell asleep. 6.5/10